Please see below for descriptions of the leadership at St George’s Church. 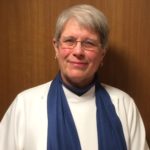 1. I am Vicar of St. George’s and completed my training at St. James’ Weybridge. Before training at Ripon College Cuddesdon I was Standards Fund Officer for the London Borough of Hounslow, and before that spent 14 years in the energy industry, primarily with SSE in Maidenhead as a pricing anaylst. I’m married to Sue, have a son Aaron doing a PhD at Bath University, stepson Ian who lives with his family in Purley and another 2 grandchildren who live in Hemel Hempstead.

2. Honorary Curate- My name is Carol and I am part of the ministerial team.

3. My name is Ray and as a Reader (or Licensed Lay Minister) I am part of the ministerial team at St George’s. My role includes preaching, teaching, assisting and leading worship, pastoral work and taking funerals when required. In addition I am on the rota to lead worship at the Whitgift Almshouses in central Croydon, teach on the Bishops Certificate in Discipleship, and Warden of Readers in the Croydon Episcopal Area

4. Hi my name is Andy and I am a Southwark Pastoral Auxiliary based here at St Georges. I live in the parish and have been worshipping here around 10 years. I run a twice monthly prayer group called Open door as well as helping out during services in a variety of ways including reading of  the Gospel and intercessions. I am developing a bereavement group and volunteer with the chaplaincy at  the Royal hospital of Neuro Disability in Putney.

5. Honorary Curate– My name Hilary and I was brought up in Shirley and it was St George’s Church community who nurtured my vocation to ordained ministry. For a number of years I have been Senior Chaplain at Croydon University Hospital. Now having retired from that role (but not from ministry!) I look forward to being able to spend more time at St George’s and hopefully being of service in this community. I’m hoping retirement will also give me more time with my husband Peter and for some of my hobbies – gardening, cooking, family history

6.  Reader- My name is Liz and I was licensed as a Lay Reader within Southwark Diocese in 1995. I joined the staff team at St George’s, with Permission to Officiate, in early 2018, after serving over 20 years in my previous Parish. My husband Andy is a Roman Catholic; we have two married children and four grand-children. Besides helping as needed with worship and preaching, and taking the occasional funeral, I am the Christian Aid Coordinator for Churches Together in Shirley and a national Trustee of the Association of Interchurch Families. Now retired, my working life was spent first in social work and then community development. I ran a Brownie Pack for over 30 years and still support local Guiding as an active member of Shirley Trefoil Guild. I currently chair the Friends and Fundraising group for Citizens Advice Croydon and also help edit SPAN, the magazine for Spring Park Residents Association.